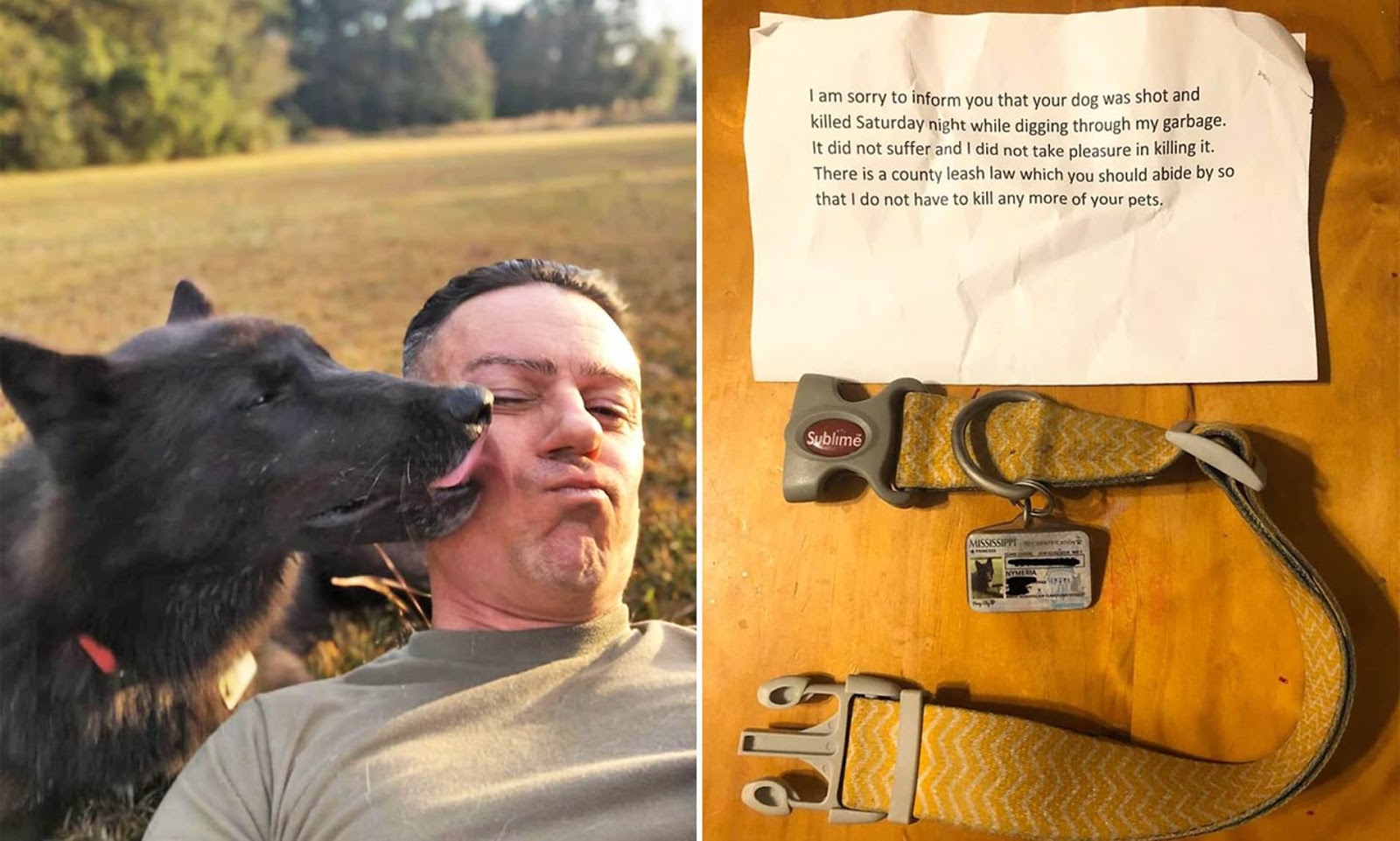 Army veteran Chad Stricker, of Pearl River County, Mississippi, spent days searching for his 10-month-old wolfdog named Nymeria after she went missing.
But his search sadly came to an end after he found a typed note in his mailbox, along with Nymeria’s collar.
The note read: “I am sorry to inform you that your dog was shot and killed Saturday night while digging through my garbage. It did not suffer and I did not take pleasure in killing it. There is a county leash law which you should abide by so that I do not have to kill any more of your pets.”

Chad Stricker/Facebook
The leash law in Pearl River County requires all animals to be fenced in or restrained on a leash, or otherwise be considered a public nuisance.
“Unfortunately we see that a lot,” Elizabeth Treadaway, Pearl River County SPCA’s manager told the Sun Herald. “This dog lost its life over an invisible line it can’t see. As soon as an animal goes onto someone else’s property, that leash law goes into effect. But just because it’s law, doesn’t make it right what this person did.”
Stricker posted photos of Nymeria on Facebook in a post that has since gone viral. The post included a note to the cruel ‘coward’ who killed his dog.

Chad Stricker/Facebook
“I want you to know she was one of the sweetest dogs anywhere around and very loving,” the post began.
Stricker referred to Nymeria’s killer as a “POS” for not calling him to let him know that he shot her, and allowed him and countless other people to waste their time looking for her when she was already dead.
Stricker also told the man he never gave him a chance to correct the problem by telling him his dog was tearing up his trash.

Chad Stricker/Facebook
“The type of person I am, I would not only have picked it all up but would have made sure it didn’t happen again,” he wrote.
“It’s sad to think I have a neighbor of your moral character living so close to me that would do this. Do I hate you, no, I pity the person you are and those who have to tolerate you. Only thing you did right here was return her collar and let me know you had killed her.”
Stricker explained that he was only a week away from having his one-acre yard completed and fenced in for Nymeria and that she never would’ve gotten into his trash again.

Chad Stricker/Facebook
Stricker ended his note by asking Nymeria’s killer if he could leave another note in his mailbox telling him where Nymeria’s body is, or at least leaving it at the beginning of the road, so that he can give her a proper burial.
“I hope you feel good about your actions as they reflect the type of person you really are,” Stricker concluded. “I pray one day you come to realize what you have done and teach those in your household to be better.”