Awaiting Slaughter At Meat Farm, She Gently Lifted Her Paw To Thank Her Saviors 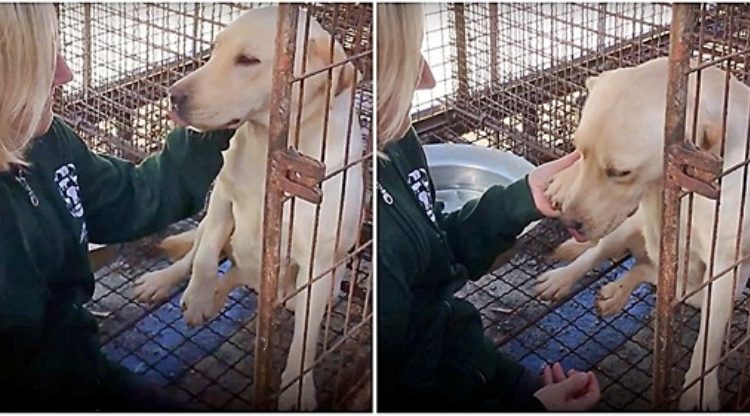 The Humane Society of the United States has shut down 13 South Korean dog meat farms, and they don’t plan on stopping until every single one no longer exists.
Dogs at these meat farms are confined to tiny metal cages with no source of comfort whatsoever. They have little to no food or water, and are forced to live amongst their feces and filth.

HSUS/Youtube
All of them are neglected and don’t receive medical care, which leads to most of them becoming very ill. The ones who survive these deplorable conditions are then sent off to be slaughtered for meat consumption. Regardless, these dogs don’t make it out alive.

HSUS/Youtube
Thankfully, organizations like HSUS, are working hard to rescue as many of these dogs as possible.
Sandie was one of 200+ dogs that HSUS saved from their 13th South Korean dog meat farm that they shut down.

HSUS/Youtube
She was living in a wire cage, lonely and scared, yet was still so sweet toward her rescuers. As soon as they approached her, she gave them her paw as if she was saying ‘thank you.’
She has since been adopted and is now living with her new loving family in the United Kingdom, where she also has a doggy sibling to play with and bunny.

HSUS/Youtube
She was once trapped in a cage with a death sentence, but she now runs free at the beach and even has her own warm bed to sleep in.