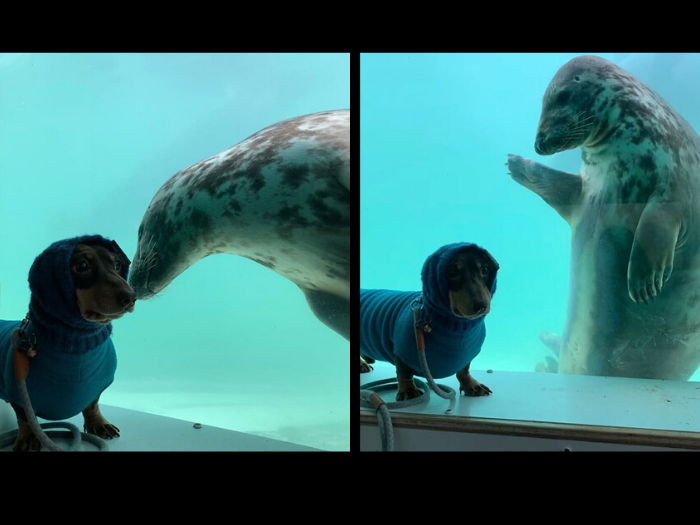 I have no doubt that many of us are no strangers to making friends on vacation. There is something oddly magical about socializing with strangers in other countries as it often leads to long-lasting friendships.
What if I were to tell you that this isn’t exclusive to humans, though? A pupper by the name of Stanley recently went on vacation to Cornwall with his human to visit the local Cornish seal sanctuary where he made friends with a seal pup named Aayla. And then they struck some poses. And everyone went “aww”!
A dachshund (commonly known as a sausage or wiener dog) by the name of Stanley was on vacation in Cornwall, England with his owner Melanie Talbot. As part of their time away from home, they decided to visit the Sea Life Trust Cornish Seal Sanctuary, with whom hydogs got in touch for an interview.

Stanley and Aayla, the land pup and the sea pup, recently became friends at the Cornish Seal Sanctuary Image credits: Melanie Talbot
Soon after entering the underwater viewing areas, Stanley’s attention was almost immediately drawn to a large seal pup named Aayla, a permanent resident of the seal sanctuary. Aayla also became excited with his new buddy as their gazes met through the tank’s glass partition.
Apparently, Aayla dove to the window and kept swimming around out of curiosity, constantly eyeballing the 2-year-old dachshund. The two spent a good 20 minutes interacting with each other and posing for photos. And oh, was it absolutely adorable!
“Aayla is often found by the underwater viewing, she absolutely loves interacting with people and dogs,”  explained Georgina Shannon of the Sea Life Trust Cornish Seal Sanctuary. “We are often sent photos from our guests who have captured Aayla interacting with their dogs, so this isn’t the first time she has made friends with a dog, although she seemed to really love Stanley!”
It is suspected that Aayla mistook Stanley for another seal as the dachshund was wearing a doggy jacket and a snoot with his ears tucked up inside as it was cold. She began mimicking certain behaviors like waving at the doggo and tilting her head like most dogs do. “I think she was absolutely fascinated by him!” elaborated Georgina Shannon. “You can see from the photos she was really interested in him and spent a long time looking at him through the glass.” Image credits: Melanie Talbot
“Aayla was rescued from Bacton, Norfolk in January, 2017 and taken to a local rehabilitation center. She was malnourished and had a small injury on her right flipper,” explained Shannon. “The flipper was discovered to be severely infected and several of the bones had to be removed, meaning she had to receive continuous care. The Sanctuary welcomed Aayla to the family in July 2018 to provide her with a permanent home.”
“Aayla is very active and enjoys playing with other seals,” continued Shannon. “Her favorite activity is to sneak up to the team and to pester the other seals when sunbathing. Aayla is very intelligent and quick to pick up new things during her training sessions. Even with her part amputated flipper she still manages to keep up with the others and get into plenty of mischief!”
Talbot, the dachshund’s owner, explained that it felt like they were friends at first sight. The way they were booping their noses at the glass made it look like they’re whispering to each other. They then struck some poses for the camera with Aayla looking more like a dog with her tilted head than an actual seal.
The owner also pointed out that someone told her dachshunds tend to sleep with their legs tucked in, making them look like seals. And when you think about it, why wouldn’t these two be friends at first sight? Both are puppers, after all!
The Sea Life Trust Cornish Seal Sanctuary in Gweek, Cornwall is a charity that rescues and provides care for sick, injured, or distressed seals as well as other marine animals. If possible, they release the animals once they recover but if not, they are given permanent residence in the sanctuary. Aayla is one of many animals that have been rescued and given a new home here. Needless to say, the two new friends look adorable together Image credits: Melanie Talbot
The Cornish Seal Sanctuary has been running for over 60 years, rescuing seal pups from around Cornwall and providing a home for animals that need care and a permanent home. “Something that people may not know about our seal pups is that once they are released, they travel far and wide,” explained Shannon. “We have had reports from Ireland that one of our released pups has been spotted there! We are able to receive this information as each pup we release has a flipper tag with a number on so if they are spotted, we will know which seal it is by their tag number.”
You can check out more of Stanley’s cuteness on Talbot’s Instagram and more seal aquatic animal cuteness on the Cornish Seal Sanctuary’s official Instagram account. Image credits: Sea Life Trust Cornish Seal Sanctuary
What are some of your holiday friendships? Let us know in the comments below!

Here’s how the internet reacted to the two pupper friendship…