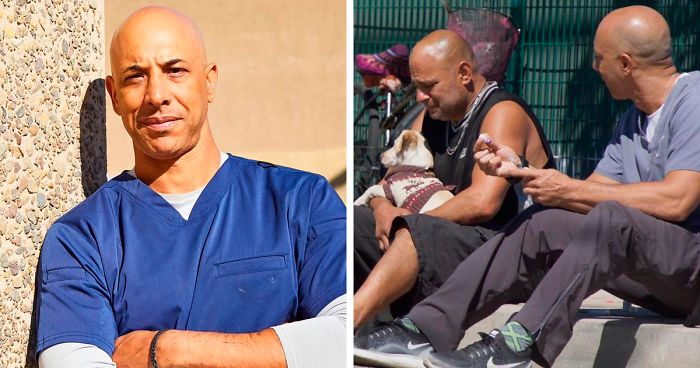 Life in modern society poses a very real challenge for some of us. It’s no secret that poverty has pushed a staggering amount of people onto the streets in the past decade. The scope of this problem is reflected well in numbers—over half a million people were officially counted as homeless in the US. The state of California has been hit the hardest. Its unsheltered population totaled up to 151,278 people last year.
Luckily, there are still some good Samaritans who bring back a glimmer of hope when it comes to the invisible lives of those suffering outside the door. Stewart Kwane, a street veterinarian, has been on a mission to help the pets of homeless Californians since 2011.
After the Great Recession hit the US in 2007, Stewart decided it was time to help those in need. “There was something about it that I loved,” said the 49-year-old man, who pays for the basic food and medicine costs out of his pocket. Scroll down for the full story about the inspirational vet below.
More info: Facebook | GoFundMe

Dr. Stewart Kwane is on a mission to help the homeless and their pets left on the outskirts of society Here, the Street Vet is pictured helping a man with colon cancer and his dog named Crazy Girl Image credits: Dr. Kwane Stewart
Dr. Kwane now runs a GoFundMe page that aims to raise donations to cover all the pricey surgeries his four-legged patients need. “The cost of minor treatments like ear infections, flea treatment, or vaccines can be around $100, whereas more serious cases like a tumor removal or dental with extractions can be $1,500.” Saving a little buddy can really add up to quite a big sum of money.
This is exactly a case for a dog named Dinker and his owner Walter “who have a connection like no other.” Unfortunately, “Dinker has a very rare condition that requires a surgery from a specialist.” The doctor is currently working on trying to make that happen, but he is aware that it’s an extremely expensive procedure. “I’ve experienced the most genuine stories of love, compassion, struggle, and hope,” said the man about his job Image credits: Dr. Kwane Stewart
But Kwane is full of hope. In a recent update on his GoFundMe page, he expressed his gratitude: “I am blown away by your generosity!” As a result, he has now set a higher goal and dreams of bringing more vets into the streets to help him spread goodwill to more suffering pets out there. “Giving a little can make all the difference,” writes the doctor on his GoFundMe page