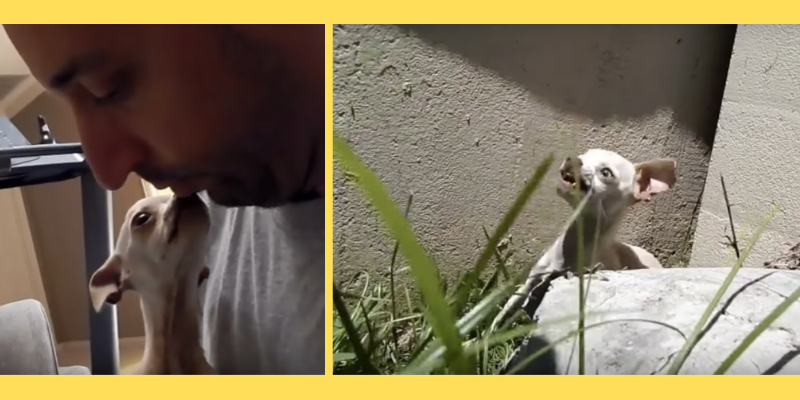 A man who rescues animals got a call about a tiny puppy running loose near a highway. She had been abandoned by a cruel owner who likely dumped her from a car on the side of the road. The rescuer got to the pup as soon as he could.
He had no idea how tiny she would be. He tried to come close but she kept running away. Finally cornered, he thought he would be able to grab her and take her out of the hot sun. But the poor girl was terrified.

Source: DogRescue, Maggie’s Story
She responded as many dogs would out of fear and she went to bite him. It was merely a warning! But thankfully this didn’t deter the kind man and he was finally able to scoop her up and put her in his car.

Source: DogRescue, Maggie’s Story
Once in the air conditioning and safe and sound, she devoured a can of dog food. The poor little Chihuahua was skin and bones!

Source: DogRescue, Maggie’s Story
The SPCA refused to take the Chihuahua because she showed aggression so the man brought her home with him. He named her Maggie.

Source: DogRescue, Maggie’s Story
The sweetest thing happens next. Sure, it takes a bit for Maggie to realize she’s safe, but once she does she thanks her rescuer with the sweetest kisses and tail wags. The tiny, skinny dog surely has a lot to get passed but she’s already doing great!

Source: DogRescue, Maggie’s Story
Maggie will have to learn to accept humans despite her trauma. Once she does that, she will be available for adoption. She spends time in a loving foster home and then before you know it, she finds a loving family.

Source: DogRescue, Maggie’s Story
This tiny dog is proof that aggression usually comes from fear. An abandoned or abused animal only responds to their previous experience. Thankfully there are rescue groups and trainers who willingly work with animals like Maggie so they can go on to loving homes.

Dogs like Maggie aren’t broken. They deserve happy lives too. Above all, they need a bit of patience. To see Maggie’s rescue and adorable “thank you” to her hero, click play on the video below!