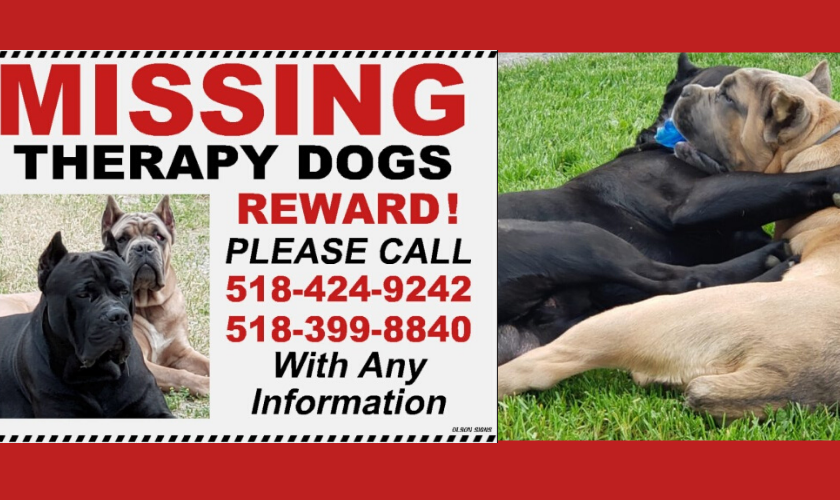 Therapy dogs do so much for the people who rely on them, so when a pair of therapy dogs went missing, their owner reached out to social media. Mary Ann Powers of Glenville, New York says her dogs went missing under  “mysterious circumstances.”
Both dogs, three-year-old Orso and one-year-old Lucia, are Cane Corsos. The dogs were trained to help powers with posttraumatic stress disorder (PTSD).

Source: Bring Orso and Lucia Home/Facebook
When a visiting nurse arrived at the home of Powers for a medical procedure, the dogs were put outside. A short time later, the dogs went missing. Powers started a page for the animals on social media pleading with the general public for help.
“My treatments are getting harder and harder now.” Powers wrote, “Due to the stress, I have to have the infusions once a week.”

Source: Bring Orso and Lucia Home/Facebook
After three weeks of searching, a monetary reward, and an electronic billboard in Albany, New York, Orso’s body was found. Powers shared the grim news on Facebook and now wants efforts focused on finding Lucia.
“Please keep her in your prayers and please keep an eye out for her,” Powers shared. “We want to thank everyone for their kindness and sincerity.”

Source: Bring Orso and Lucia Home/Facebook
The reward has grown to $7,500 and more information on the missing dog can be found by visiting Powers’ dedicated Facebook page.
We extend our deepest condolences on the loss of Orso and hope for the safe return of Lucia soon.