10 Y.O. Boy Writes A Letter To His Neighbor Saying “I’m Wondering If Maybe After This Virus You Need A Dog Sitter” 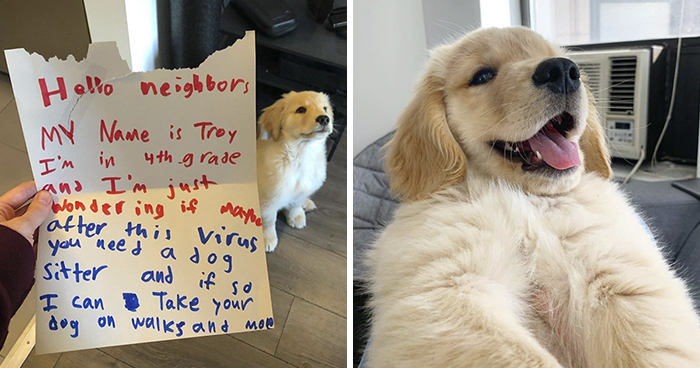 Recently, one 4th grader has warmed people’s hearts with an adorable letter he sent to his neighbors. Apparently, the boy was very excited that a new pupper had graced his neighborhood, so he offered to babysit the little golden retriever. The letter made the rounds on social media with people commenting that the letter is “wholesome” and one woman hitting the nail on the head: “A child’s pure heart + a dog’s pure soul = a match made in heaven.”
More info: Instagram

Recently, this letter written by a 4th grader named Troy has made the rounds on social media Image credits: arthurthefloof
“Hello neighbors, my name is Troy, I’m in 4th grade and I’m just wondering if maybe after this virus you need a dog sitter and if so, I can take your dog on walks and more,” the adorable letter reads.

In the letter, the little boy asks whether he could babysit the neighbors’ golden retriever “after this virus” Image credits: arthurthefloof
Troy’s letter was later shared on Arthur’s Instagram account with a caption: “I made friends with a small hooman today. He’s like basically me-sized. I bet I can get him to give me more treats than my hoomans.”

Soon enough, Troy and the golden retriever named Arthur had their first play date together Image credits: arthurthefloof
“Just a quick pupdate – me and the smol neighbor had a really great (socially distant) play date today. Because he’s so smol we didn’t take any pics just for privacy purposes but he told me all about his dog fren and even showed me some dance moves!! I have a feeling we’re gonna be best buds!” the update was later shared on Arthur’s Instagram.

“I have a feeling we’re gonna be best buds!” Arthur later “wrote” on Instagram Image credits: arthurthefloof
Apparently, Arthur’s newfound fame was quite a surprise for his owners. The pup’s Instagram following grew in almost no time, and now the adorable goldie has over 30k fans. Image credits: arthurthefloof
“My hoomans told me that me and my fren Troy broke the puppernet yesterday,” Arthur “shared” on his Instagram. “I’m glad it brought me so many new frens!! Do any of you have treats to spare? I celebrated my newfound celebrity status by trying to eat a dead baby bird because I gotta keep my hoomans humble.”

And he already has more than 30k fans