Doomed To Die In Fire, He Knocks Doc To Floor To Thank Him For Sparing His Life 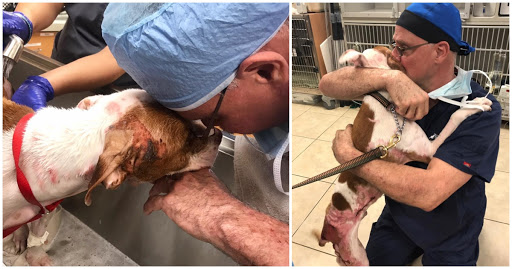 Dogs are smart creatures, but just imagine how fearful the dog in this story must have been when he saw a brush fire approaching and no one could explain what was happening. All he saw was danger and people running away, leaving him behind.
Later named Smokey, the dog was living in a homeless camp when a massive fire broke out. Smokey was left there chained to a tree while everyone safely ran away.


Rescuers responded quickly and found Smokey. They cut the chain he was tied with and rushed him to Peggy Adams Animal Rescue where they examined him. They concluded he would need extensive medical treatment and rehabilitation.

Source: Jupiter Pet Emergency & Specialty Center
In just a few weeks, Smokey was already improving drastically. Dr. Latimer and the incredible medical staff at JPESC had worked around the clock to make sure Smokey survived and thrived! They managed his pain and provided a loving environment so he could begin to come out of his shell and trust humans again.

Source: Jupiter Pet Emergency & Specialty Center
Many veterinarians would have opted to put Smokey down. He was in bad shape, had no home, and wasn’t a big fan of humans but Dr. Latimer refused to turn the dog away. He and his staff felt Smokey deserved a fighting chance. Somehow, this special dog found his way into Dr. Latimer’s heart.
Look at Smokey and Dr. Latimer having a moment! Isn’t it precious? It’s as if they came to a mutual understanding. It’s as if the doc is saying, “you fight hard, boy, and I’ll do my part to fix you.” And Smokey is saying, “Okay!”

Source: Jupiter Pet Emergency & Specialty Center
Before long, Smokey was healthy enough to go to a new home. But he thought about his family at JPESC every day!
Smokey went back for a check-up and when he sees the staff and his favorite vet, he can’t contain his excitement! He thanks the medical staff first…
But then he sees Dr. Latimer! The man who led his recovery! Just look at that embrace! To say Smokey is grateful is an understatement!

Source: Jupiter Pet Emergency & Specialty Center
Don’t deprive yourself, click play on the video below to watch Smokey reunite with his favorite vet and tells him in his own doggy way, “Thank you for saving my life!”