Woman Throws A Puppy At A Man, He Refuses To Give It Back And Shares How Happy The Doggy Is Now 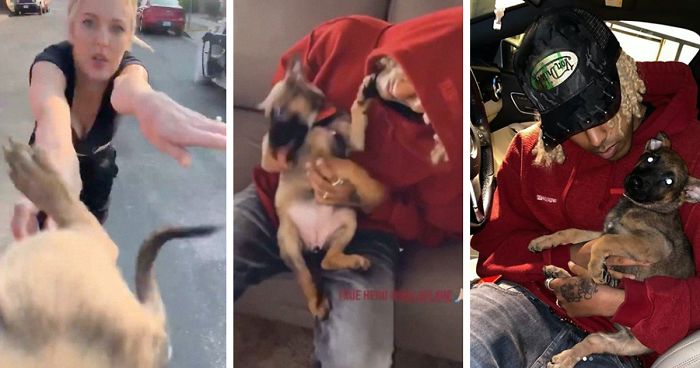 Another bizarre Karen incident has just gone viral. On Friday night, rapper Glomula posted a video that showed a white woman holding a puppy and preventing him from getting back into his car.

As the woman walked towards him in the middle of the street, she began telling him that “he’s black” and became more and more confrontational. Finally, when Glomula asked why she held the dog in such an unsafe manner, the woman violently threw the pup at him, obviously hurting the poor critter.

During the incident, the woman directly referred to the man’s race as she paced around with the dog in her arms The good news is, Glomula kept the dog Glomula also set up a GoFundMe, with an initial goal of $3,000, to take care of Movie’s immediate needs and ongoing care The fundraiser was fully secured in less than eight hours The rapper even started an Instagram account for his new pet, where the little fella has already amassed over 220,000 followers We should determine whether or not we can take care of a dog before getting one. Then nobody would have to throw them at strangers in order to get rid of them. “Time is the most important thing,” Rachel Spencer, the creator of The Paw Post pet blog, told hydogs. “To be a parent, you need to be there for your dog, especially puppies where it is round the clock, but even with an older dog, it’s recommended you take at least two weeks off work to settle them in.”

Then, you need to consider who will look after the pooch when you have to go away. Spencer suggests asking yourself will you have a dog walker, sitter, or a friend or relative come to care for them. You can also consider daycare. But then keep in mind it is going to be around other dogs. “A young dog may feel overwhelmed or an older dog who may need more quiet time could feel very stressed in a busy daycare.” “What if your pet falls ill? Can you pay for treatment? Can you pay monthly insurance costs? Do you like going on lots of holidays abroad? You’ll need to factor in paying for your pet to be cared for into the cost of your holiday,” Spencer continued.

“Do you own or rent your property? If you rent, will your landlord allow pets? It would be devastating to welcome a dog into your home then have to give it up. Even if you own your flat, there could be a clause in the lease saying no pets.” Basically, it comes down to you being able to include your pet in every part of your life. Including weekends when you’re away for work, nights out, and holidays. “Your dog is part of your family.”

“Finally, do you mind being covered in dog hair, slobber, your best shoes and handbags being chewed, and waking up to ‘accidents’ in the small hours?” Spencer asked. If the answer to this and all the above questions is yes, you’re probably going to be a great dog parent. Here’s what people said about the whole ordeal

P.S. According to Know Your Meme, Karen is a slang term used as an antagonistic female character. It became really popular in 2020, when the term was broadly applied to a swath of white women who had been filmed harassing people of color, including dialing the emergency services on them for no criminal reason.