Dog Adopted Orphaned Opossum Many Years Ago, And Still Carries Him Wherever She Goes 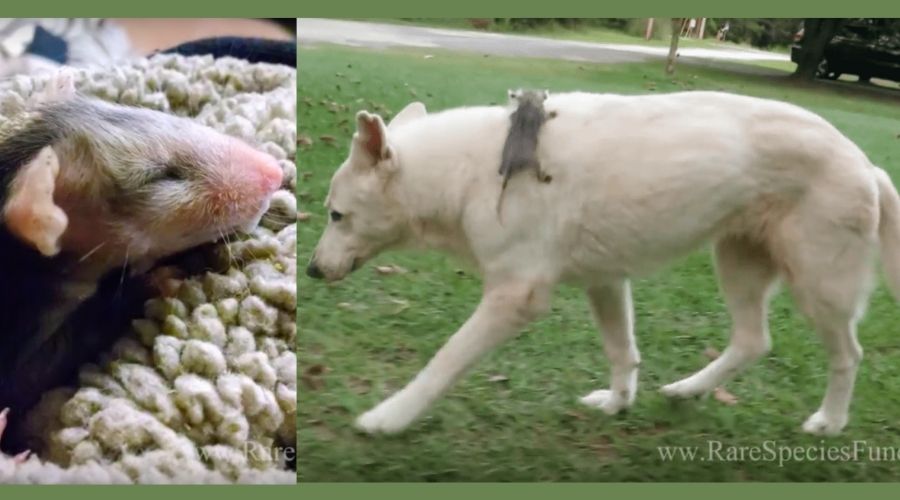 Sadly, opossums are at a high risk of getting hit by cars, since they cross the roads at night when it’s hard for people to see them.

One opossum who died after being hit by a car was lying on the side of the road, but she wasn’t alone. Clinging to the side of her was her tiny baby. If this baby opossum was left there, he would have died, but luckily he was rescued just in time.

Rescuers brought the baby opossum, now named Poncho, to the vet for special care. But although he was healthy and thriving, he still didn’t have a mother to watch over him and that’s when the real story began.

Enter Hantu, a white German Shepherd. Hantu didn’t have any babies of her own, and Ponch was in need of a mother, so the two of them made the perfect pair. Luckily, they bonded instantly and quickly became inseparable and it’s a wonderful sight to see.

Poncho would cling onto Hantu’s back, just as she did with her real mother. Three years later, nothing has ever changed. Even though Poncho has grown much larger from when she was rescued, she still rides on Hantu’s back during their wonderful walks.

The two of them are now enjoying life together at Rare Species Fund in Myrtle Beach, South Carolina, which was established to provide funding to wildlife conservation programs. Poncho and Hantu are helping RSF do its part to help educate people to appreciate the wealth of their wildlife diversity. It’s relationships like this that gives us hope about how we can all get along in this wonderful world.